Articulate Engage lets you choose which options and controls you want to include on your interaction player. To customize the player, click the first tab on the Engage ribbon (its name corresponds to the type of interaction you're using), and then click Player.

When the Player Properties window appears, the Features button will already be selected, and you can begin choosing your preferences. As you make changes to the options on the left side of the window, keep an eye on the Preview area on the right side of the window. It'll reflect your choices, so you can decide whether you like the changes. 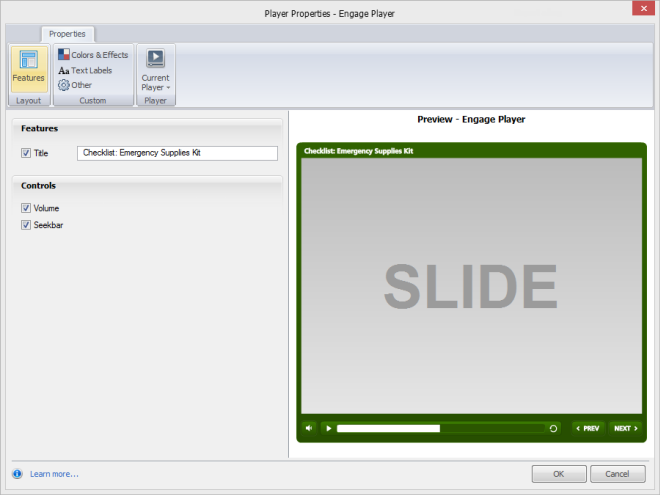 When the Title box is marked, the title appears in the upper left corner of your player.

If you don't want to display a title on your player, uncheck the Title box.

The title defaults to the type of interaction you're building, but you can change it. Just type the title you want in the field provided. This changes the title on the player, but it won't change either of the following:

Tip: You can also change the player title when you publish [link to Previewing and Publishing and Interaction].

Displaying a Volume Controller and Seekbar

The Controls area of the window includes additional options for your interaction player:

What About Navigation Controls, Such as Prev and Next Buttons?

You might have noticed that the Controls listed on the Player Properties window don't include slide navigation controls, such as Prev (previous) and Next buttons. Whether these buttons appear on your player depends on the Playback Mode you've chosen for your interaction. (See this tutorial for more about playback modes.)

To change the playback mode, close the Player Properties window if it's open. Then go to the first tab on the Engage ribbon (its name corresponds to the type of interaction you're using), and click Interaction Properties. Click the Playback tab on the left edge of the window, and select one of the following modes:

If you'd like to change the wording used on the Prev and Next buttons, see Changing the Player's Text Labels.

Saving Your Changes to the Player

To save your player, click the Current Player button on the Player Properties window and choose Save. Enter a name for the player if you're prompted, and click OK. 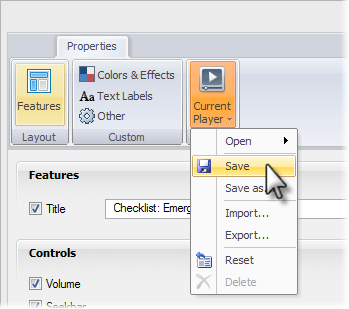 For more details about using the Current Player options, see Saving Your Player or Switching to a Different One.