Engage '13: Saving Your Player or Switching to a Different One

When you make changes to an interaction's player, those changes get saved within your interaction's project file. But Articulate Engage also lets you save the player on its own, so you can reuse it in other interactions or share it with other content developers.

In this tutorial, we'll show you how to save a player, how to apply a previously saved player to an interaction, and how to import, export, and delete players.

Go to the first tab on the Engage ribbon (its name corresponds to the type of interaction you're using), and click Player:

To save your player, click the Current Player button, and choose either of the following: 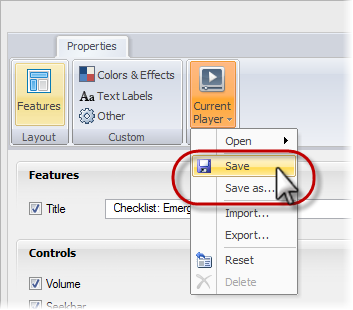 When you save an Engage player, it gets stored as an .xml file on your local hard drive and is added to the list of available players you can apply to any interaction. (See the next section of this tutorial to learn how to apply a saved player to another interaction.) The location of the .xml file depends on your version of Windows:

Applying a Player That You Previously Saved

When you save a player, you can apply it to other interactions. To do that, click Current Player on the Player Properties window, and choose Open. 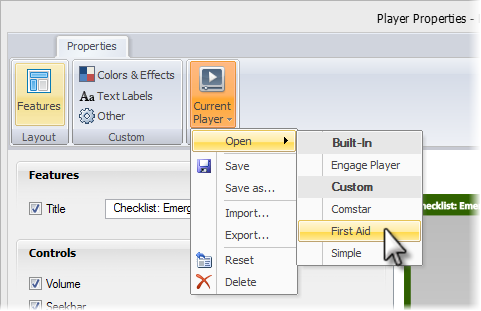 Scroll through the list to find the player you want to use, and then click it to apply it to the current interaction.

The default Engage Player will always appear in the Built-In section at the top of the list. Any Custom player whose name is followed by "(on disk)" has been saved to your hard drive. A player name followed by "(in project)" is stored only within the current project and hasn't yet been saved under its own name.

If you want to share a player with a colleague or transfer it to a different computer, export the *.xml file. That same file can then be imported by any other Engage user. Here's how to export a player:

Now you can give the file to a colleague, or use it on another computer. For instructions on how to import the file, see the next section of this tutorial.

If someone gives you an *.xml file for an Engage player, you can import it into your current project. Here's how:

Deleting a Player from Your Hard Drive

If you no longer need a player you previously saved, you can delete it.

Undoing Changes to a Saved Player

If you want to revert back to the previously saved version of the player, just click Current Player and choose Reset. 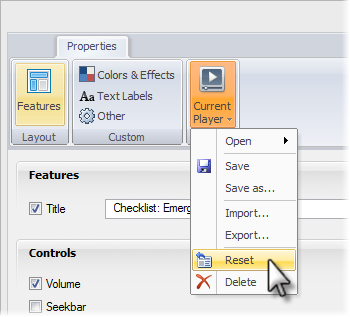