We added more animations to Articulate Storyline to help you tell your story, including motion paths. In this tutorial, we'll look at how to add animations. To learn about synchronizing animations, see these tutorials:

If you're importing content from PowerPoint that already has animations, this tutorial explains how PowerPoint animations are handled in Storyline.

To add an animation to an object in your course, do the following:

Tip: An object can have one entrance animation and one exit animation, but you can add multiple motion path animations to the same object.

Adjusting the Speed of an Animation

Entrance and exit animations default to a duration of 0.75 seconds. Motion paths default to 2 seconds. But you can make them faster or slower. Just enter a time in the Duration field for the entrance, exit, or motion path animation, or use the arrows to increase or decrease the time. The duration can be as fast as 0.1 seconds or as slow as 59 seconds.

You can tweak the behavior of most animations by choosing Effect Options or Path Options. 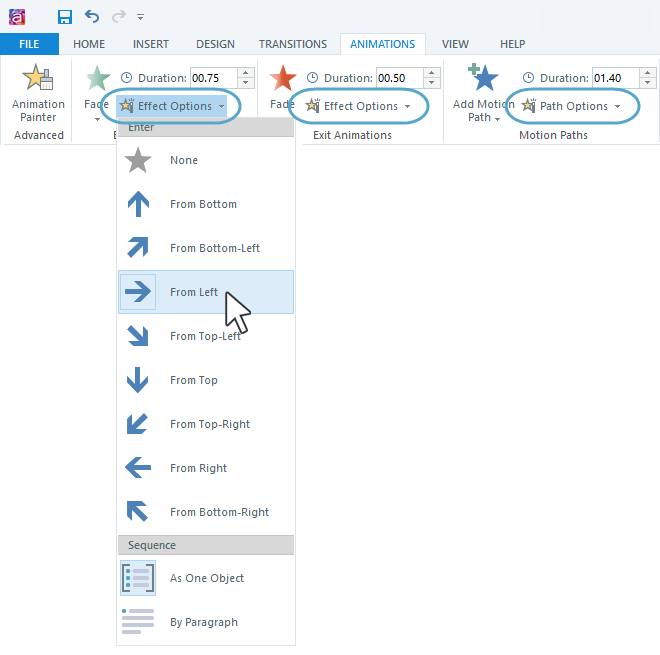 Copying Animations from One Object to Another

Need to use the same animations on several objects? Save time by copying animations from one object to another with the Animation Painter.

Tip: If you need to apply the same animations to multiple objects, click the Animation Painter twice to keep it turned on. When you're finished, click it again to turn it off, or press the Esc key on your keyboard.

Can I Use Animations on Master Slides?

Yes! Go to the View tab on the ribbon, and click Slide Master or Feedback Master. Select the master slide layout that has items you want to animate, then apply entrance, exit, or motion path animations using the steps above. (Learn more about slide masters and feedback masters.)