Rearrange the Order of Multiple Objects

Enhanced timeline management helps speed up your workflow, especially when it comes to pasting. Here are some of the many ways this feature makes pasting objects in Storyline 360 easier and more consistent.

Choose Order of Pasted Objects on the Timeline

Sometimes the order in which objects are stacked on the timeline is important. For example, maybe you need certain objects to appear behind or in front of other objects on your slide. Now when you copy or duplicate objects, you can save a step by choosing the order in which they appear on the timeline before you paste them. Just select the existing object you want to paste your objects on top of and paste. They'll appear right above the object you selected, as shown below.

If the stacking order doesn't matter, simply copy and paste your objects as you did before, and they'll appear at the top of the timeline.

Paste Objects at the Playhead Position

It gets better! To help you work more efficiently, you can now paste objects into existing groups on the timeline. Just select a specific object within a group, then paste an object for it to appear above your selection. If you need to reposition the pasted object, simply drag it up or down the list.

Note: When you select a group on the timeline and paste an object, Storyline 360 displays that object right above the selected group.

When you paste an object from one slide to another, Storyline 360 now automatically honors the timeline duration of the destination slide. So, let's say you copy and paste a 20-second object into a new slide that's 10 seconds long. Storyline 360 now shortens the pasted object's duration to 10 seconds to match the destination slide's timeline. That way, you don't have to manually reduce the timeline duration.

Note: When you copy and paste an object with a short duration to a new slide with a longer timeline, Storyline 360 still honors the source duration. For example, a three-second object keeps its duration even when the destination slide is longer than three seconds.

Preserve or discard an object's timing, animations, and triggers when pasting it to a new slide with the paste special feature. To access it, do any of the following after copying the object, then check or uncheck any of the options, as described in the table below. 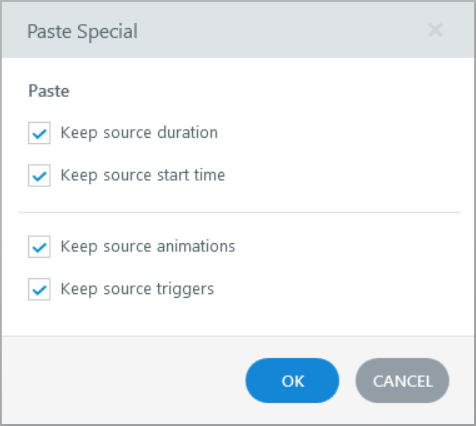 There are now three options for aligning objects and the playhead on the timeline. To view them, right-click any object on the timeline, hover over Alignment, and select one of the options below.

The timeline now displays minutes and seconds (00:00) instead of just seconds, and you can view the total slide duration at a glance, making working with longer slides even easier. Starting with the September 2022 update, you can also adjust your objects' timing and duration in minutes and seconds.

But wait, there's more! When the timeline is too long, you can instantly reset it to five seconds or shorten it to match the object with the longest duration. Just right-click anywhere on the timeline and select one of the options below.

Enhanced timeline management is exclusive to the April 2022 update and later for Storyline 360. However, it doesn't affect compatibility. You can open project files that use the new timeline enhancements in Storyline 3 and earlier versions of Storyline 360.