If you see a “Completed with exceptions” error when importing a translated Word document into Storyline 360, here's what it means and how to fix it.

If there’s a mismatch between both files when you import the translated Word document back into Storyline 360, you'll see the following “Completed with exceptions” error.

The actual number of exceptions varies based on the number of missing strings. 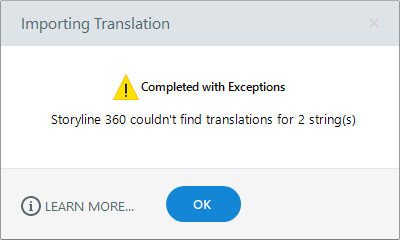 How to Fix It

To avoid this error, only modify text in the Translation column of the Word document.

However, it’s easy to fix the issue after it occurred! Simply export your Storyline 360 project to Word again, translate the new text strings, and reimport the document.