Scalable vector graphics (SVGs) on PowerPoint slides become native shapes when you import the slides into Storyline 360. As a result, you can resize the shapes without diminishing their quality, and you can customize their fills, outlines, and effects using Storyline’s drawing tools.

Storyline 360 doesn’t support importing SVGs directly. However, you can import them from PowerPoint. The first step is to insert SVG images into a PowerPoint presentation. Then save the presentation on your local computer.

Next, import your PowerPoint presentation into Storyline 360. This user guide explains how.

You need Storyline 360 build 3.27.18751.0 or later. Here’s how to install the latest update. (Earlier builds of Storyline 360 convert SVGs to pictures rather than shapes.)

Step 3: Customize the Shapes in Storyline 360

Each SVG in PowerPoint becomes a shape (or group of shapes) in Storyline 360. Use the drawing tools in Storyline to customize the fills, outlines, and effects for these shapes.

If an image is composed of multiple shapes, you can ungroup them in Storyline and customize each shape separately. Just right-click the image, scroll to Group on the context menu, and select Ungroup. 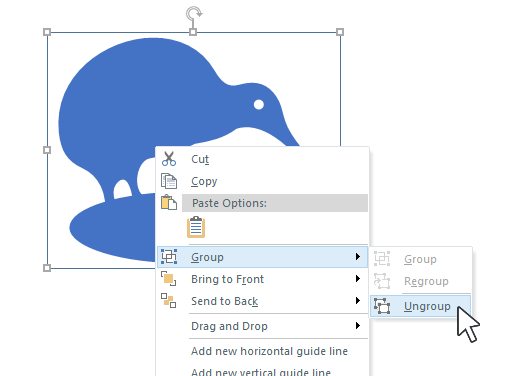 Tip: Your images might change colors when they’re converted from SVGs in PowerPoint to shapes in Storyline 360. The default color for Storyline shapes is the accent 1 color in your theme colors. And you can switch to any color using Storyline’s drawing tools.