You can now add a trigger that lets learners print any slide in your course. Here's how.

In the trigger wizard, select the Print slide action, choose the slide you want to print, and set up your trigger event (e.g., when the user clicks), as shown below. 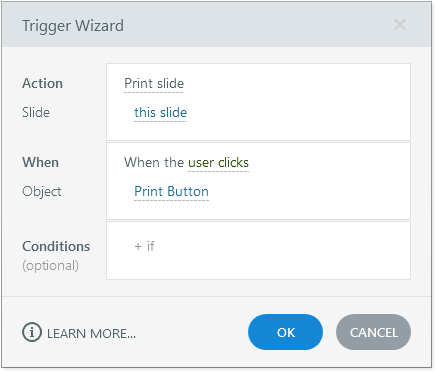 You can add print slide triggers to slides, layers, and slide masters. You can even add a print slide trigger to a custom player tab on the modern player, as shown below, so learners can print the current slide they're on or any slide you define, such as a certificate slide.

You'll need to publish your course to experience the print slide trigger. It won't work during preview.