Minimize distractions and boost accessibility in published Storyline 360 courses with a full-screen toggle. Click or tap the full-screen button, as shown below, or press Ctrl+Alt+F to scale the training content to fill the screen. Click or tap the button again to return to normal viewing mode.

Here's how to enable the player full-screen toggle for your learners. In the Controls area of the player properties window, simply mark the Full-screen box. That's it!

Create your own full-screen toggle by adding a trigger that toggles the built-in true/false variable Player.FullScreenMode, as shown below. Note that full-screen triggers require the learner to perform an action, such as clicking a button or pressing a key. 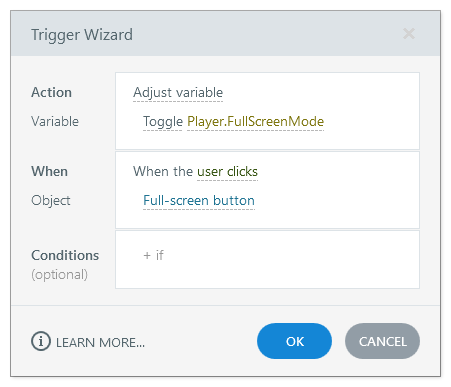 Custom full-screen toggles let you display content in full-screen mode when all player controls are turned off. You can even give learners a slide-only experience when you hide the modern player frame altogether.