Use one trigger to quickly toggle between an object's current state and its hidden or disabled state. For example, easily create buttons that show/hide additional info or hints. Check out the comparison below:

In the trigger wizard, select the Change state of action. Choose the Object you want to toggle—either an object on the slide or a player navigation button. Click Set State next to the state of the object and change it to Toggle as shown below. Choose either the Hidden or the Disabled state and set up your trigger event (e.g., when a button is clicked). 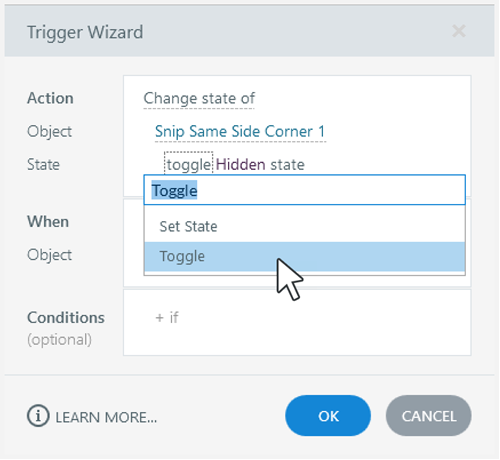 Toggle hidden/disabled state triggers are exclusive to Storyline 360 starting with the July 2022 update. Project files that use this feature won't open in previous versions of Storyline 360. To restore compatibility, delete the toggle trigger.